Norwegian software company Opera, famous for its web browsers both for mobile and desktop, has unveiled a new brand identity today. The update illustrates a fresh logo and title change - aiming to better reflect the success the company has enjoyed over the past 20 years.
The company firmly believes that a 'new look and feel' will further recognize the capabilities of the web browser service, where Opera serves over 350 million internet users each month. Moreover, it is reported that 1.1 billion users access content provided by the company through its subsidiary advertising division, Mediaworks.
As far as its logo rebranding goes, the iconic "O" in the logo has been modified and the 'software' text has been omitted. In addition, the red color remains a vital characteristic, while the new 3D effect represents the gateway that leads to an expanse of content provided by Opera.
The brand update is set to roll out on the iOS platform first, to its flagship Opera Mini application. The future months will see the identity introduced to the wider family, including both Android and the recently made available app for Windows Phone. The icon will also appear on Opera for computers in the near future.
Source: Neowin 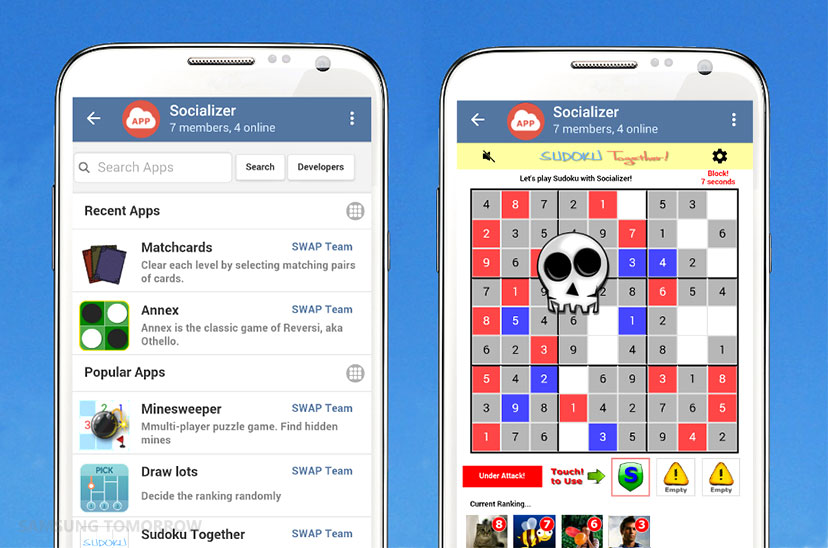 Samsung unveiled the new messaging app known as Socializer Messenger App that is taking mobile communications to the next level through its enhanced features and content.
With mobile devices such a central part of people’s lives these days, messaging applications have become hugely important for communications and staying in touch. Instant messaging programs can be used to share pictures and videos, and the option to add stickers and emoticons has really enriched communication when chatting.

The App comes with lots of amazing features such as shown below:-

Windows Phone is no longer the fledgling it was a several years back, with each passing year Microsoft has released updates that have added features to the platform and almost reached parity with iOS and Android. With project Astoria in the works and already an open-sourced version of the Windows Bridge for iOS, Windows phone will benefit from the catalogue of apps available on both iOS and Android of-course assuming the developers use those tools and that’s a big IF. I’ve looked through the current Windows Phone store and tried out the apps below which I find very good and they are locally designed.

Metroziki
Developer: SimbaCode
This is a beautifully designed music player for windows phone. It uses native windows phone controls and follows the windows phone design (can I call ‘it Metro’ now?) language so provides a seamless experience.
Here’s to hoping it will be updated to become a Universal Windows App.
The app currently has a 5 star rating in the store.
Store Link: https://www.microsoft.com/en-gb/store/apps/metroziki/9nblgggzq81g

At this year’s build conference, Microsoft announced several ‘bridges’ that will enable developers from competing platforms port over their popular apps to
Windows without any major changes to their apps. One of those bridges is Project Astoria.
What is “Project Astoria”?

“Project Astoria” (also referred to as “Project A”), is a Universal Windows Platform Bridge toolkit that enables you to build Windows apps for phones by reusing your Android code. With “Project Astoria” you’ll be able to:

Possibly in preparation for the upcoming release of Android Pay, Google has released a brand new Google Wallet app into the wild on Google Play. The new Google Wallet features a new icon and a much sleeker design that cuts down on the clutter of the previous version.

When you first open the new app, you'll notice that the main color theme is green, rather than the blue in the older app. The landing screen gives you the familiar options to send our request money, with an activity feed laid out below. If you open up the hamburger menu, you'll be able to tap over to view your Wallet card and balance info, along with options to lock or cancel your card and add money.

Keep in mind that this is a new, separate app on Google Play, so it'll require a fresh download and can live side-by-side with the old Wallet app on your Android phone. If you'd like to check out the new Google Wallet in full, you can find it as Google Wallet (New) on Google Play now.
From www.androidcentral.com