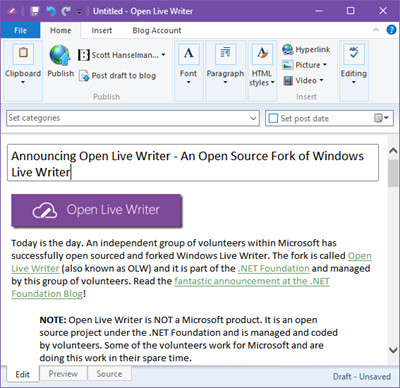 Windows Live Writer is a blogging tool that Microsoft originally released back in 2006, and it still remains popular today, despite the last major update arriving in 2012, followed by a final, minor update in early 2014.

Its continued popularity led to growing calls for the software to be open sourced, to allow its user community to take over its development. Earlier this year, Microsoft's Scott Hanselman delivered some good news on that front, saying: "We are going to open-source Windows Live Writer."

Today's release of Open Live Writer is designated version 0.5, and by Hanselman's own admission, you will need to "put up with some bugs" if you're planning to install it in its current form. He recommends that those users who aren't willing to deal with those bugs should stick with Windows Live Writer 2012, which can still be downloaded from Microsoft.