Windows Defender improves, rises above nearly half the competition in new antivirus test 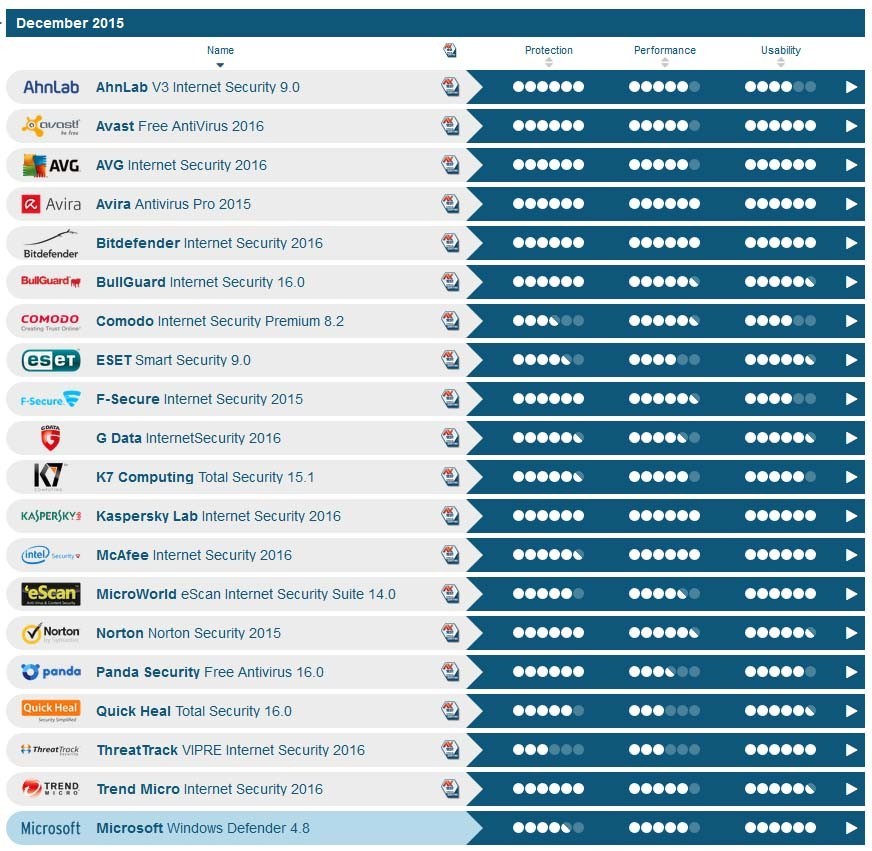 Microsoft has conceded in the past that its anti-malware offerings only provide baseline protection. For Windows 7 and Vista, there’s Microsoft Security Essentials, while Windows 8 and Windows 10 come with the nearly identical Windows Defender.

Each vendor's score is a sum of three metrics: Threat protection, Performance (system slowdown, speed) and Usability (ease of use, false positives). Each item can attain a rating of 0 to 6, totaling a maximum of 18 points. A minimum of 10 must be achieved to gain a certification rating.

Several years ago Microsoft did poorly on a regular basis, scoring 9.5 and 11.5 during the Windows 8 era. The results prompted Microsoft to defend its commitment to protecting users in a blog post, citing its own telemetry data as indication of progress.

However, Redmond’s scores have improved in the most recent round of testing: on Windows 8, Microsoft scored 15.5, while for Windows 10 and Windows 7, the total was 14.0 for each. (In the screenshot below, vendors are listed alphabetically; Microsoft is placed at the

The AV-Test Institute compared 20 vendors, including Avast, AVG, Bitdefender, Kaspersky, Norton and Trend Micro. On Windows 10, the latest results show that Windows Defender matches the threat protection of only Comodo and ThreatTrack, but doesn’t actually beat any of the other companies. On Windows 8, however, Defender beat those two vendors and matched ESET. But using the overall score of all three metrics, Microsoft ranked 10th out of 20 vendors. bottom because their software is considered baseline. Full test results can be viewed and sorted by operating system, performance metric and timeframe.)