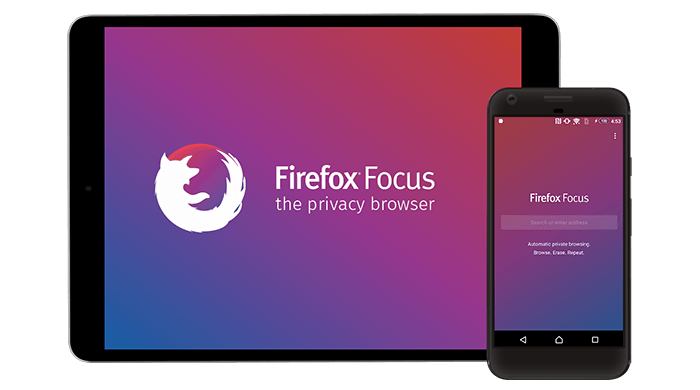 The new Firefox Focus update gives you a whole range of possibilities your privacy browser has to offer in a clear and unobtrusive way, not interrupting the usage at all and automatically refreshing after each click on the Erase button.

Search suggestions are a key part of web search that can make searching more convenient.  Easily activate the feature by opening the app settings > “Search” > select the checkbox “Get search suggestions”.

Firefox Focus release - the browser’s visual design is now completely optimized for the recently released Android Pie. New icons, a customized URL bar and a simplified settings menu makes it easier to use and provide for a consistent user experience.

A new engine for the Firefox Android browsers

While the new app design is obviously an eye-catcher, we’ve also made a groundbreaking change to the underlying Firefox Focus framework that’s not visible at first glance – but will make a huge difference in future releases. Focus is now based on GeckoView, Mozilla’s own mobile engine, making it a pioneer among our Android apps.

Switching to GeckoView will give Focus the benefits of Gecko’s Quantum improvements and enables Mozilla to implement unique privacy-enhancing features in the future, such as reducing the potential of third party collection. For now, you won’t notice much, but you’ll be helping us create the next generation of Firefox browsers just by using Focus, and we’ll return the favor by giving our Focus users unique features that other browsers on Android simply won’t be able to offer.

In addition to home screen tips, iOS users will receive another much asked feature with today’s release: Siri Shortcuts. Siri is one of the more popular features on iOS devices and we’re all about ease for our users. So, in order to improve the Firefox Focus for iOS user experience further, you’ll now be able to set and open a favorite website, erase and open Firefox Focus, as well as erase in the background via shortcuts.

The latest version of Firefox Focus for Android and iOS is now available for download on Google Play, in the App Store and now also in the Samsung store.