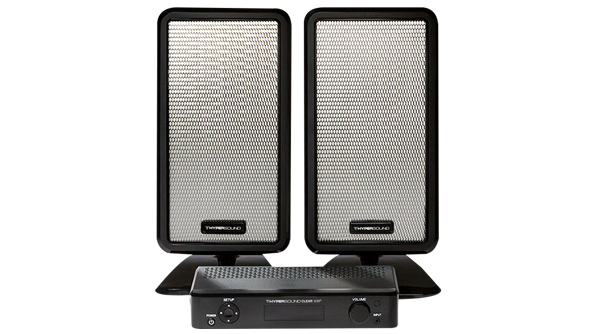 Hypersound is commercially focused on assisting those with hearing loss. Hypersound can create an area of the room in which, for example, an entertainment system's volume is doubled, allowing those with and without hearing loss to watch and listen together without the use of a more personal and less reliable hearing aid appliance.

That's why Hypersound is to be sold into private, high street audiologists. Hearing loss is increasingly prevalent among younger men and women, and solutions like these physics-defying speakers can present a less intrusive and slightly cooler solution than the current alternatives.

The speakers themselves come as a set of two emitters and an amplifier. The emitters resemble a pair of A4 sized mirrors and work by creating an ultrasonic carrier signal at 44 kilohertz — way beyond the hearing ability of even the cleverest dogs — that can be directed into a straight beam. This invisible, inaudible tube of primed air is ready to have a source signal modulated on top of it. As the source signal comes off the face of the emitter, it travels through the ultrasonic carrier signal and becomes audible at a distance four to six inches from the speaker's surface. The sound then continues down this long, narrow beam.
More visit hypersound hearing solutions