Solar Backup Battery device at only $69.95 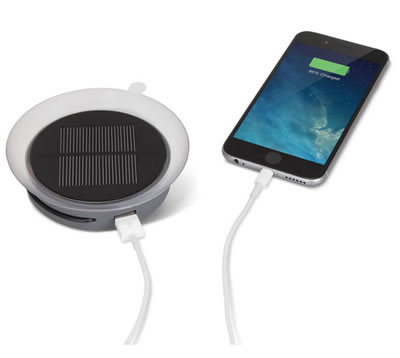 This is the portable battery that attaches to a window and uses solar power to charge a smartphone or tablet. The device has a suction cup that allows you to mount it to a window in a car or plane and the built-in solar panel charges the internal 1,000 maH lithium-ion battery.

A smartphone or tablet connects to the unit through its USB port (cable not included) and the device charges an iPhone 6 up to 44% and iPhone up to 56% on a full charge.

From the name itself, you will be able to know that this solar backup battery will work regardless of whether you get from Point A to Point B using a plane, a train or an automobile. As long as the sun shines, of course, it will be able to work just fine. The thing is, on a plane, you would most probably want to close them shades in mid-flight, at least on economy class as the bright light in the middle of the day can be quite a distraction to the other people who are on board.

This device’s built-in solar panel charges the internal 1,000 maH lithium-ion battery by harnessing the power of the sun, and it takes up to two hours to fully recharge via USB if the weather is not being co-operative. Five LEDs located on the rim will indicate internal battery capacity.