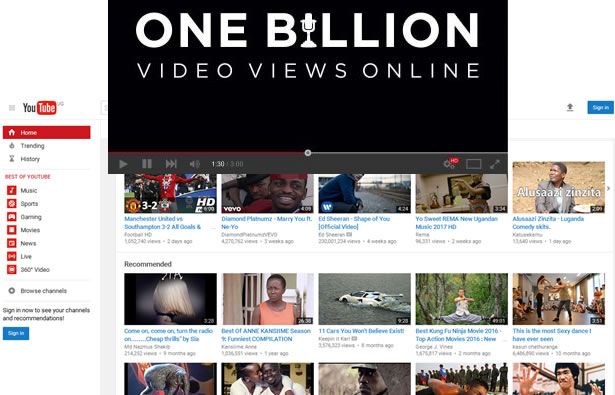 The leading free video content provider YOUTUBE revealed their big milestone of people around the world are now watching a billion hours of YouTube’s incredible content every single day!

According to the YouTube blog, the milestone represents the enjoyment of the fantastically diverse videos that creative people make every single day. Around the world, people are spending a billion hours every day rewarding their curiosity, discovering great music, keeping up with the news, connecting with their favorite personalities, or catching up with the latest trend.

This represents a 10-fold increase since the Google owned platform started building algorithms that analyzes user data to make personalized suggestions in 2012.

Youtube ontop of that milestone has decided to go live on mobile
This month, YouTube began letting popular online video personalities broadcast on the go using mobile devices, ramping up a challenge to Facebook and Twitter in the live-streaming arena.

Google-owned YouTube has supported live streaming of video through computers for about six years, even broadcasting US presidential debates online.

The new mobile live streaming feature allows YouTube content creators whose channels have more than 10,000 subscribers to broadcast through apps tailored for mobile devices such as smartphones, according to product managers Barbara Macdonald and Kurt Wilms.

They promised that the feature would be available more broadly at YouTube soon.

Followers and those watching the video can pay to highlight a message they post to the chat window during a broadcast, and keep it pinned there for up to five hours.