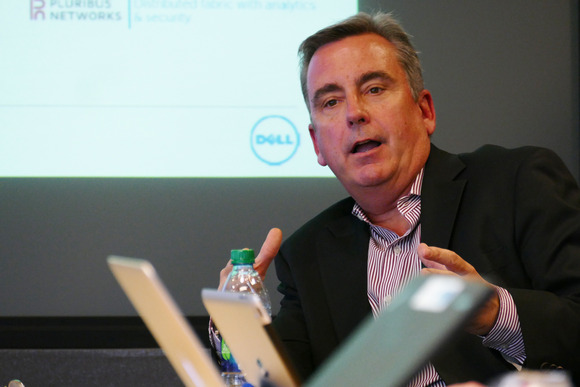 "I think a lot of enterprises have this envy of cloud operators," said Enterprise Strategy Group analyst Dan Conde. Companies like Google and Facebook build whole data-center systems from scratch, earning the freedom to quickly develop and roll out new applications and add capacity as needed. Most IT shops don't have the workforce to pull that off, so an all-encompassing OS from Dell might give them a shortcut, Conde said.

OS10 isn't that yet, and Dell has no timeline for extending it out beyond the network. But that's the direction the company is going, said Tom Burns, vice president and general manager of Dell Networking and Enterprise Infrastructure.

“Our vision is a compute-centric, software-defined data center,” Burns said. A single OS across networking, computing and storage would allow enterprises to manage configurations centrally rather than in separate silos.

The move suits a company that has long put hardware at the heart of its pitch to consumers and enterprises, developing and selling its own gear while remaining agnostic about the software that runs on it. About two years ago, Dell started letting customers buy its network switches with OSes from SDN (software-defined networking) pioneers like Big Switch Networks and Cumulus Networks.

"Now you have choice at two layers," ESG's Conde said. With OS10, even customers who choose Dell's own OS over the alternatives can customize their software stacks. Dell calls it the only fully open network OS.

OS10 comes only on Dell hardware. The base version, with the Linux kernel, is free. The full software stack for Layer 2 and Layer 3 networking, and a command-line interface, will come in a premium version that customers will have to pay for.

The base OS is in beta now for Dell’s S-Series top-of-rack switches and will be generally available in the first quarter. The premium version will be in beta starting in the second quarter and generally available in the third quarter for the S-Series switches. OS10 for Dell’s Z-Series fabric switches will come later this year. It will probably be offered in parallel with Dell Networking OS 9 until the end of the year, Burns said.